The Annunciation to the Theotokos 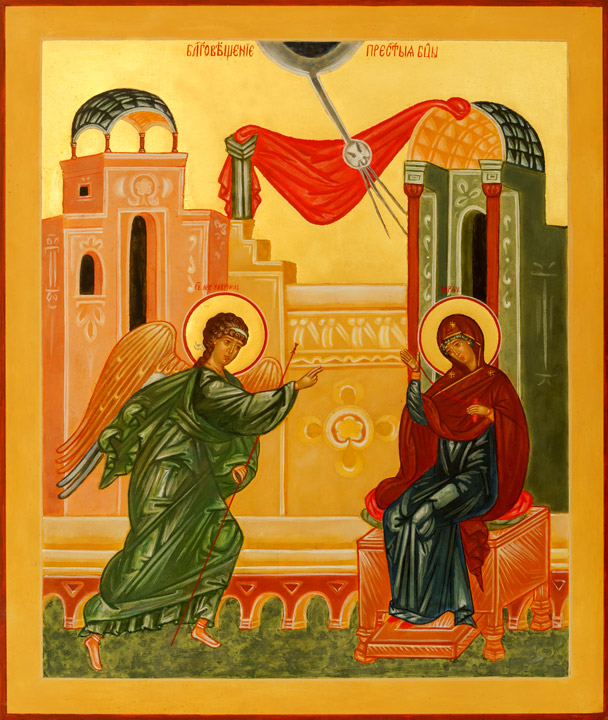 The Annunciation (or Evangelismos in Greek) to the Theotokos is one of the Great Feasts of the Orthodox Church, celebrated on March 25. Greeks also celebrate Greek Independence Day this day. This is one of only two days during Lent, the other being Palm Sunday, when fish is permitted.

According to the Gospel of Luke 1:26-38, the Archangel Gabriel appeared to Mary to announce to her that she would conceive and bear a son, even though she "knew no man." According to holy tradition Mary had come home to her parents when she was only fifteen when she was visited by Gabriel.

This date was selected by the Church Fathers to be exactly nine months ahead of the Nativity of Our Lord (or vice-versa?), indicating that Christ was conceived in perfection at that time "of the Holy Spirit and the Virgin Mary," as stated in the Nicene-Constantinopolitan Creed.


Celebration of the feast

The feast of the Annunciation normally falls during the season of Great Lent, but it is still a joyous day. The fast is lessened, with fish allowed on this day.

If the feast falls on the same day as Pascha, the resultant festival is called Kyriopascha and is celebrated with special rubrics. Presently, Kyriopascha is possible only among the churches that observe the old style or traditional Julian calendar or the Gregorian calendar (that is, Finland and Estonia).

Many people make a pilgrimage as a special tribute to the Theotokos on the island of Tinos. Thousands of pilgrims jam the docks and city streets to visit the Church of Evangelistria (Tinos, Greece) that safeguards a miraculous healing icon of the Theotokos. Revealed in a vision, it was found buried in a field in 1823, and the church was built to house it. Pilgrims bring items of precious metals and other gifts to leave at the church. On August 15 (Dormition of the Theotokos) and March 25 the icon is carried through town in a grand procession.

Today is the beginning of our salvation,
The revelation of the eternal mystery!
The Son of God becomes the Son of the Virgin
As Gabriel announces the coming of Grace.
Together with him let us cry to the Theotokos:
Rejoice, O Full of Grace,
The Lord is with You!

O Victorious Leader of Triumphant Hosts!
We, your servants, delivered from evil, sing our grateful thanks to you, O Theotokos!
As you possess invincible might, set us free from every calamity
So that we may sing: Rejoice, O unwedded Bride!