In the centre of Hong Kong, the vast city in the Southwest of China, at a tiny old cemetery you can see a modest gravestone; Russian letters are easily read on it. This is the place of the final abode of Archpriest Dmitry Uspensky whose destiny took him thousands miles from his native shore - Province of Vladimir. During almost 40 years the priest, a graduate of Vladimir School of Theology, had been the rector of one of the most remote of the Orthodox parishes. He combined the activities of a priest, missionary, politician and a diplomat in China under the red-blue-white-striped British flag. 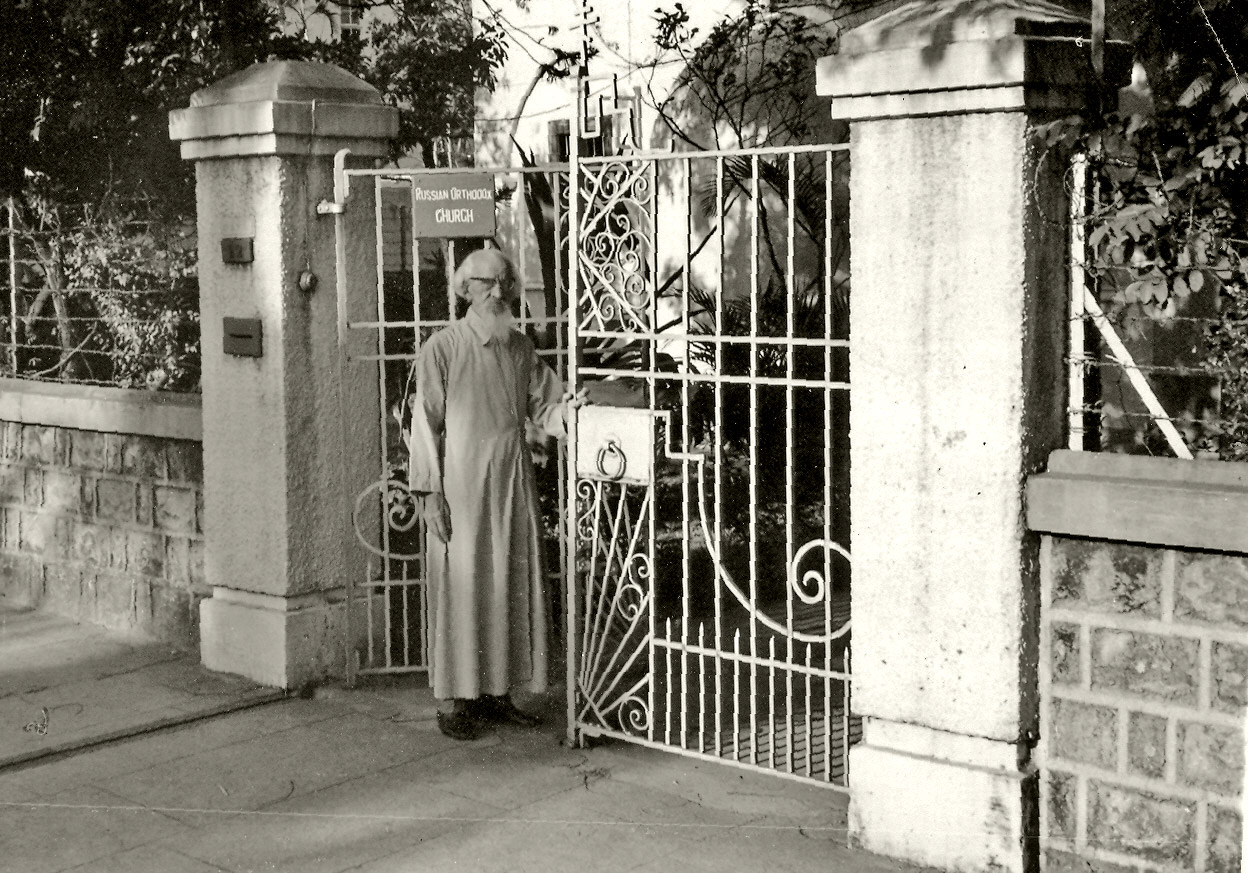 The Pastor from Vladimir Upcountry

Uspensky’s ancestors had served as priests in various rural communities of the Vladimir-Suzdal Diocese. His grandfather Constantin Nikolaevich Uspensky was the rector of the church in Bogorodskoye-Chechkinykh town of Shuya District, and his father Ivan Constantinovich was a teacher, later a priest too, in the rural communities of Vyazniki, Kovrov and Melenki Districts. He was married to Claudia Ivanovna Tikhonravova, a cousin of a well-known historian and a regional ethnographer from Vladimir – Constantin Tikhonravov. In Vyazniki in 1886 the Uspenskys had a son from this marriage christened Dmitry. He followed in the steps of his father and graduated from Vladimir School of Theology in 1907.

Even at that time there was an intellectual fermentation of the students of theological schools, many of them had studied by inertia, without wishing to dedicate their lives to ordained ministry. Nevertheless, Dmitry Uspensky was an exemplary student, and his higher calling was studying languages. Latin, Greek, Hebrew as well as German and French were taught very seriously at the theology school. This young student from Vyazniki had shown himself a real polyglot. Together with devout religiosity and obsessive adherence to Orthodoxy, it foredoomed his entire further career.

At that time Russian Orthodox Church was in need of missionaries in the Far East, and Dmitry decided to go there. However, to convert to Christianity the local people of Manchuria, it was necessary for him to have a perfect knowledge of Chinese, Mongolian and Korean. For that reason student Uspensky was sent to the Chinese-Mongolian Branch of the Lazarev Institute of Oriental Languages in Vladivostok. After his successful graduation, he returned to Vladimir in 1913 with the knowledge of at least three more languages. In Vladimir, Archbishop Nicholas (Nalimov) of Vladimir and Suzdal, who had blessed him to go on language studies to Vladivostok, ordained Dmitry Uspensky a priest on the 14th of January, 1913 at the Uspensky Cathedral. 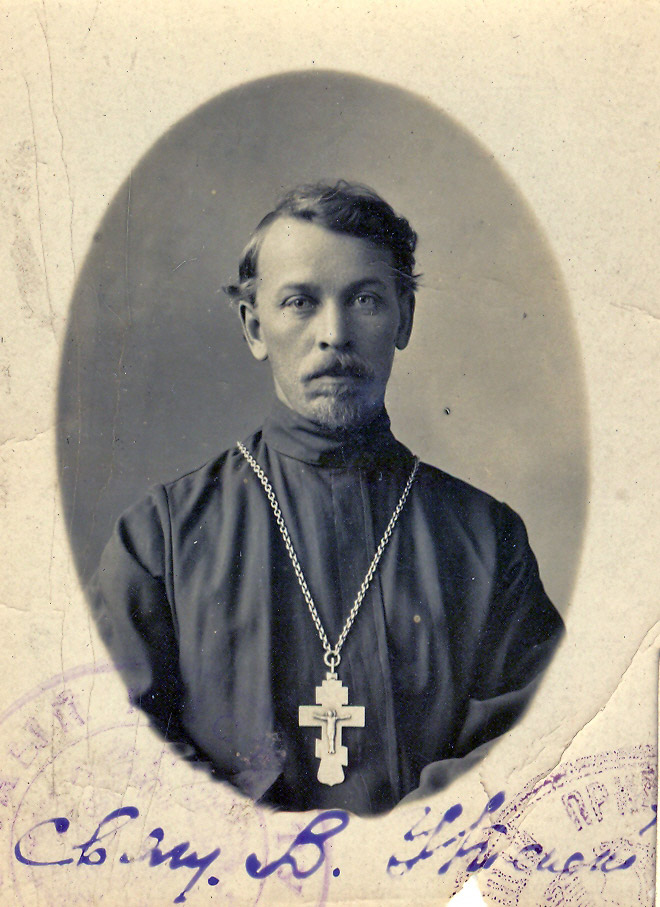 “The Apostle of China”

Soon the young priest said goodbye to his family members and went back to the Far East. As it turned out later, he left his small motherland forever; he had never seen any of his relatives anymore. Priest Uspensky was appointed the rector of the church in Nicolo-Aleksandrovskoye town near Khabarovsk. At the same time he taught at Khabarovsk Girl’s High School. In 1917 Fr. Dmitry began to serve on Russky Island in Peter the Great Bay (the Sea of Japan) in so called Vladivistok Fortress. In the parish of Fr. Dmitry there were the personnel of 6 redoubts, 27 coast batteries, powder magazines and cartridge stores, a wharf, a mine and torpedo station and 4 telephone stations. In 1920, in the midst of the Civil War priest Dmitry Uspensky was transferred by the Church authorities to Tianjin (Tientsin), China, where he began to serve as a priest and missionary continuing to study Chinese. For seven years in Tianjin Fr. Dmitry had mastered the subtleties of Chinese, the hardest language to learn. He even wrote a textbook and compiled a Russian-Chinese dictionary – a magnum opus that itself could get him fame. His colleagues-missionaries jokingly called him “the Apostle of China”. 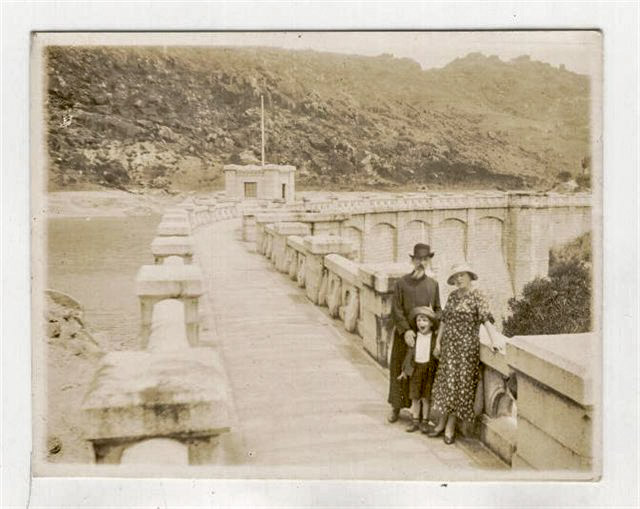 In March, 1927 priest Uspensky was officially employed by the Russian Orthodox Ecclesiastical Mission lead by the titular bishop of Pereslavl-Zalessky Fr. Innokentiy II Figurovsky, whose ancestors come from Vladimir Diocese. After the final defeat of White Russians China was flooded by Russian refugees who came there through Central Asia and Far East; the number of refugees estimated by the researchers reached half million. Therefore, the Orthodox missionaries in China gave absolute priority to spiritual guidance of their compatriots.

From Hong Kong to Manila

In 1934, after 7 years of his service in Beijing Dmitry Uspensky, elevated to the rank of an archpriest, was sent to the cities of Southern China to celebrate regular divine services. The huge country was catastrophically short of priests. A priest from Shanghai once in a while used to visit Hong Kong, Canton (Guangzhou), Aomen (Macau) and other cities. Modest, highly-educated, distinguished by unresting energy Archpriest Uspensky made things hum, quickly got everybody’s respect and support of the Orthodox population, who loved the priest for his kindness and generosity. For many of émigrés who was left destitute abroad and who surrendered themselves to despair, Fr. Dmitry’s moral and material support made much of a difference; quite often Fr. Dmitry simply saved the lives of his compatriots. 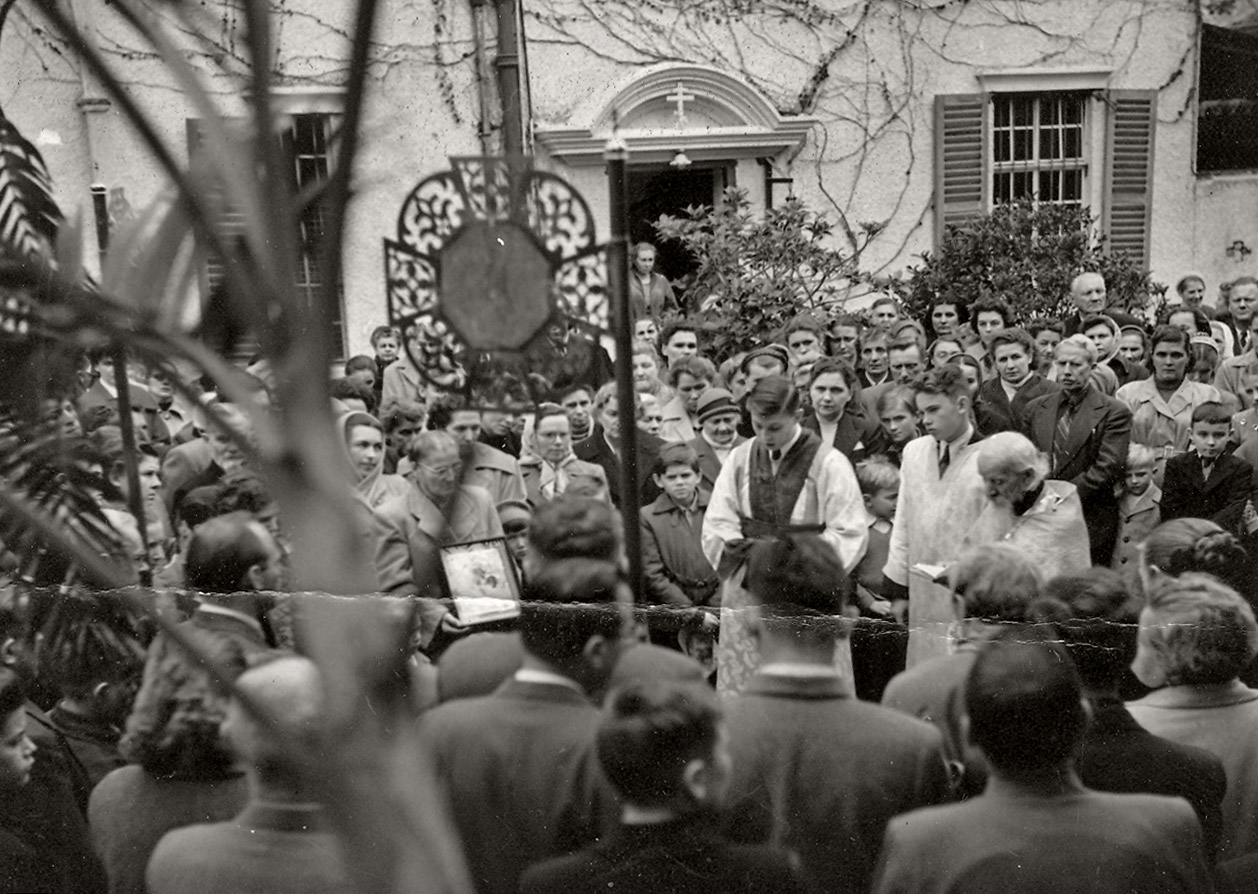 A short time later, due to his commitment three new churches were opened: the Church of Ss Peter and Paul in Hong Kong, the Church of the Icon of the Mother of God “The Unexpected Joy” in Canton (Guangzhou) and the Holy Trinity Church in Aomen (Macau). In the autumn of the same 1934 he organized an Orthodox community in Manila, the capital of Philippines. In 1937 Archpriest Uspensky opened a church in Amoy (Xiamen). Hong Kong became the centre of Fr. Dmitry’s Christian ministry, where he organized an excellent choir and a Sunday school for both children and adults. At that time Hong Kong was a British colony. The highly-educated priest-polyglot was a respectable person for Chinese authorities as well as for British Colonial Administration. Occasionally Archpriest Uspensky mediated between his people and local officials, asserting the rights of his parishioners.

In the years of the Great Patriotic War Fr. Dmitry, who hadn’t accepted the triumph of the Bolsheviks in Russia, spoke to support for the Red Army in his sermons, wishing the victory to Soviet Russia over Hitler’s forces. He also took a stand against the Japanese who, among other things, destroyed an Orthodox church in Manila. It’s said that Fr. Dmitry, having in mind successful attacks of Soviet forces, concluded his sermons as a brave Soviet intelligence officer with the appeal “For our victory!” That was shocking for the most uncompromising émigrés. In 1945 the parish of Archpriest Uspensky took the jurisdiction of the Moscow Patriarchate. However, the Chinese revolution of 1949 caused many new problems for the old priest. Being afraid of the repressions from the new regime, the émigrés of the first wave began to leave the Celestial Empire, going mainly to Australia, Brazil, and Canada. The government of Mao Zedong persecuted votaries of any religion without exception for Orthodox Christians. Although Fr. Dmitry stayed within the territory of a British colony he was repeatedly offered to leave revolutionary China. 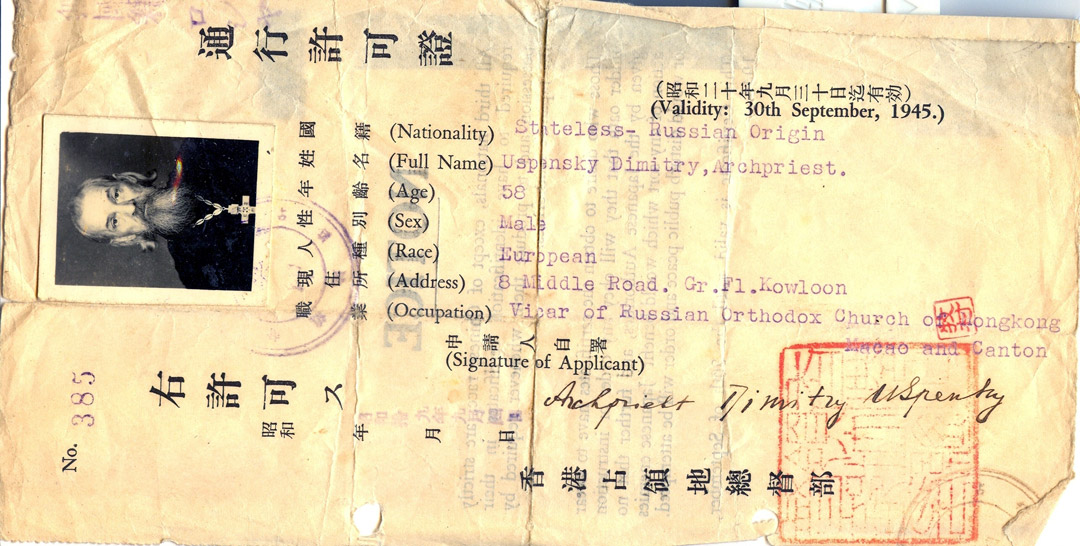 The communications with the head of the Mission and governing bishop were cut off. The last Orthodox bishop in Beijing Victor had gone to Moscow. Archpriest Uspensky had remained in the spiritual blockade. Due to the penalties of the big-time politics of the time, this situation lasted for almost 20 years. Only in 1968 Bishop Yuvenaly (Poyarkov) of Zaraisk (future Metropolitan of Krutitsy and the head of the Department for External Church Relations) visited Hong Kong on his way from Tokyo. His Grace awarded Fr. Dmitry with a pectoral cross from the Patriarch of Moscow and All Russia Alexiy I for many years of selfless labour for the benefit of the Orthodoxy.  On the 28th of November, 1968 His Grace celebrated the Divine Liturgy in the Church of Ss. Peter and Paul in Hong Kong. It was the first episcopal service in the city since 1945.

Soil from Vyazniki on the Grave in Hong Kong

By that time Fr. Dmitry's health had got much worse. Fr. Dmitry was no longer able to celebrate the divine services but he met the young Archpriest in full liturgical vestments. In 1969 Dmitry Uspensky’s daughter Adelaide, at his request, visited the Soviet Union as a tourist. According to the legend, just then, 40 years ago, she visited Vyazniki (there were no places having defence-related significance, and foreigners were reluctantly allowed to go there). She brought a handful of soil from there. In the morning of the 17th of January, 1970 Archpriest Dmitry Uspensky died one day shy of his 84th anniversary. The church burial of the distinguished pastor and missionary took place on the 25th of January after the Divine Liturgy at the Colonial Cemetery of Hong Kong. The delay of the burial was caused by the expectation of the arrival of Bishop Hermogenes of Podolsk who was sent from Moscow especially to hold the funeral. A handful of soil from faraway Vyazniki was thrown onto the grave of Archpriest Uspensky. 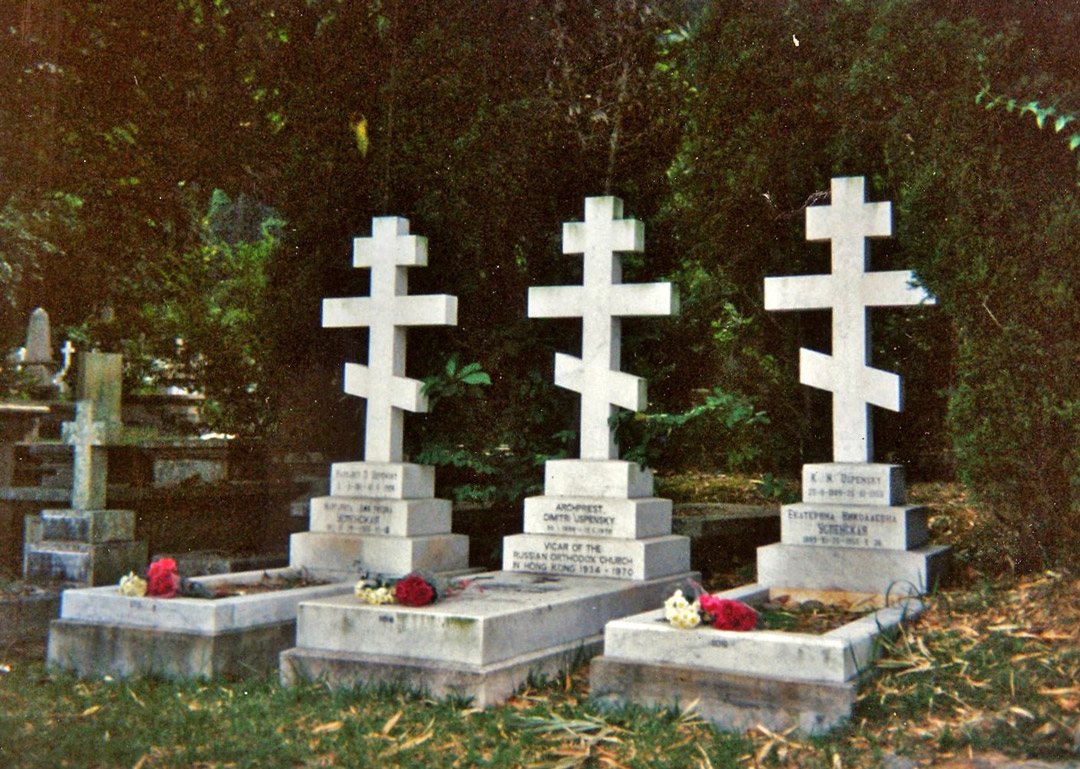 However, nine years later the major part of the cemetery became the construction site of a new road, and British authorities decided to demolish it. The last surviving admirers of Archpriest Uspensky applied to the Governor of Hong Kong David Trench with a request to transfer the grave of Fr. Dmitry to the place near the old Chapel of the cemetery which stayed out of the construction site. He acceded to the request of Uspensky’s daughter. In such a way 30 years ago came to the end the priest’s earthly life, which had begun 93 years before in our Vyazniki.

The Mission Goes on

The Orthodox church in Hong Kong was closed soon after Fr. Dmitry Uspensky passed away. One of the holy relics – the temple icon of Saints Apostles Peter and Paul – was handed over to the newly established Holy Trinity parish in Australian city of Melbourne. Only in 2004 the Orthodox parish was re-established in Hong Kong. Archpriest Dionisy Pozdnyaev was appointed its rector.

In 2008 the parishioners of Holy Trinity Church in Melbourne handed over back the temple icon of Saints Apostles to their brothers in faith in Hong Kong – Fr. Dionisy and his people. While doing so they underscored the merits of Archpriest Uspensky, whose mission goes on now.

Regular memorial services in commemoration of the first rector of the Orthodox parish Fr. Dmitry are still being conducted on his grave.