During Lent and on Pascha the Russian Ecclesiastical Mission in China used to send priests to remote districts of the country, where there were no Orthodox churches for the Russian emigrants. In 1933, the head of the Mission Bishop Victor (Svyatin) sent Priest Dmitry Uspensky, who served in Beijing, to Hong Kong, where many Orthodox emigrants from Russia lived. They worked mostly for British companies and were British nationals. 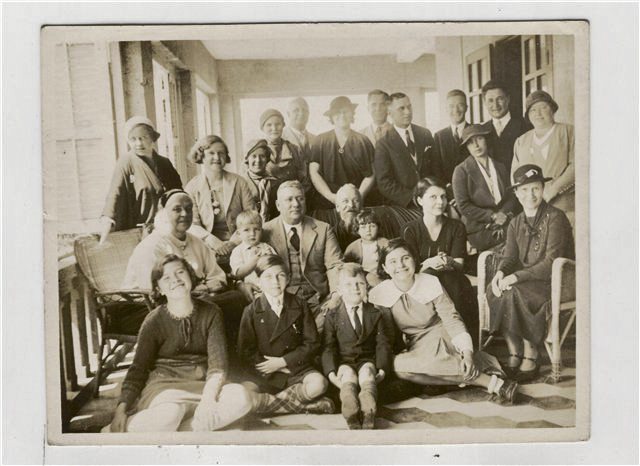 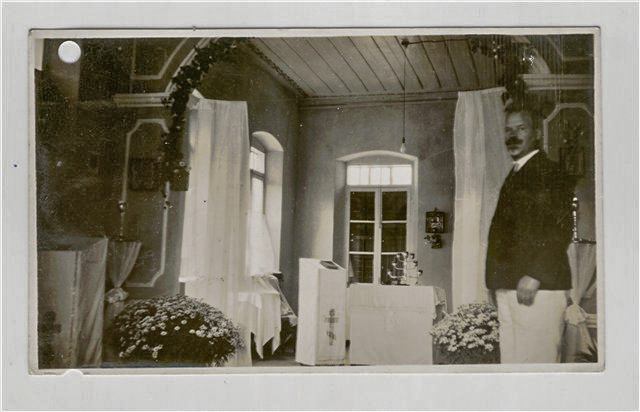 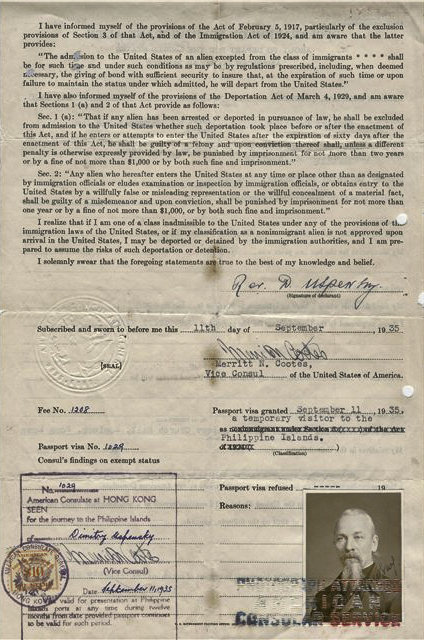 The divine services were celebrated in the Anglican Church until the prayer house was opened in the Middle Road, 8. The church community organized Ladies' group of adherents of Church Beauty and Education, Charity Foundation, Foundation for the construction of the Church and an amateur choir. The community intended to construct a new permanent church building in early 1940s. The drawings were prepared, but the war stood in the way of these plans. Many Englishmen and Russian people became prisoners of war in the Japanese camps. Fr. Dmitry managed to keep the parish safe during that hard time.

Soon after World War II the Hong Kong parish moved to a new place at the address 12 Essex Crescent, Kowloon Tong. The Russian Ecclesiastical Mission in China took the jurisdiction of the Moscow Patriarchate in 1945, and the Orthodox community in Hong Kong followed suit. However, the Russian refugees from the north of China, who lived in Hong Kong at that time, disagreed with the decision of the parish as they were waiting for permission to go to Australia, Brazil, Canada and other countries. They prayed in the Anglican Church for some time, and later asked Fr. Dmitry to allow them to place their iconostasis in the garage of the Ss Peter and Paul parish. All the same, they did not become members of Fr. Dmitry's community.

In 1945­-1946 the most part of the refugees left Hong Kong. Many old­time parishioners of the Church of Ss Peter and Paul also left the city. The construction of a church building was out of the question. All churches of the deanery, except the parish of Ss Peter and Paul, were closed, and the wonderful cathedral in Manila was destroyed by a Japanese shell during hostilities in the Philippines. The revolutionary events in China in 1949 brought about new problems for the parish in Hong Kong. The contacts between the head of the Mission in Beijing and the ruling bishop were interrupted.

On September 25, 1955, soon before the Chinese Orthodox Church was formed, Archpriest Dmitry Uspensky wrote to Archbishop Victor to Beijing: "With God's help we have persevered in our work so far, though the number of parishioners reduced from 300­350 to 85, including women and children... Naturally, we are concerned with the destiny of our parish, which is located on the territory of the British colony ... It is difficult to say whether the new jurisdiction will be favourable for us. It is necessary to keep the Hong Kong parish, though a small one, on the territory of the British colony." The Holy Synod of the Russian Orthodox Church included the deanery of Hong Kong into the Beijing diocese of the Eastern­Asian Exarchate, but soon after that the Russian Ecclesiastical Mission in China was closed and the Exarchate was abolished.

Archbishop Victor (Svyatin) left China, but did not give any instructions concerning the jurisdiction of the Hong­Kong parish. The Orthodox Church in the continental China was now administered by the Chinese clergy. According to the Russians who stayed in Hong­Kong, an attitude of the Chinese clergymen to the Russian clergymen was not fair. The parishioners refused to submit to Bishop Simeon (Du) of Shanghai or to Bishop Vassily of Beijing. Fr. Dmitry advised the parishioners to apply to Moscow, but they were against any contacts with Moscow, while formally recognizing the jurisdiction of the Moscow Patriarchate. This uncompromising position was largely explained by the fact that His GraceVictor had not informed Fr. Dmitry Uspensky of his departure for Moscow.

At the beginning of 1968 the Hong­Kong parish was on the verge of being closed. Fr. Dmitry was no longer able to celebrate the divine services, and was going to ask Patriarch Alexiy I for retirement, but the parishioners did not want a new priest appointed by Moscow. They entreated Fr. Dmitry to remain being their pastor, if only to take confessions and giving them spiritual guidance. The general meeting of the parish on February 17, 1968 resolved not to apply to Moscow. 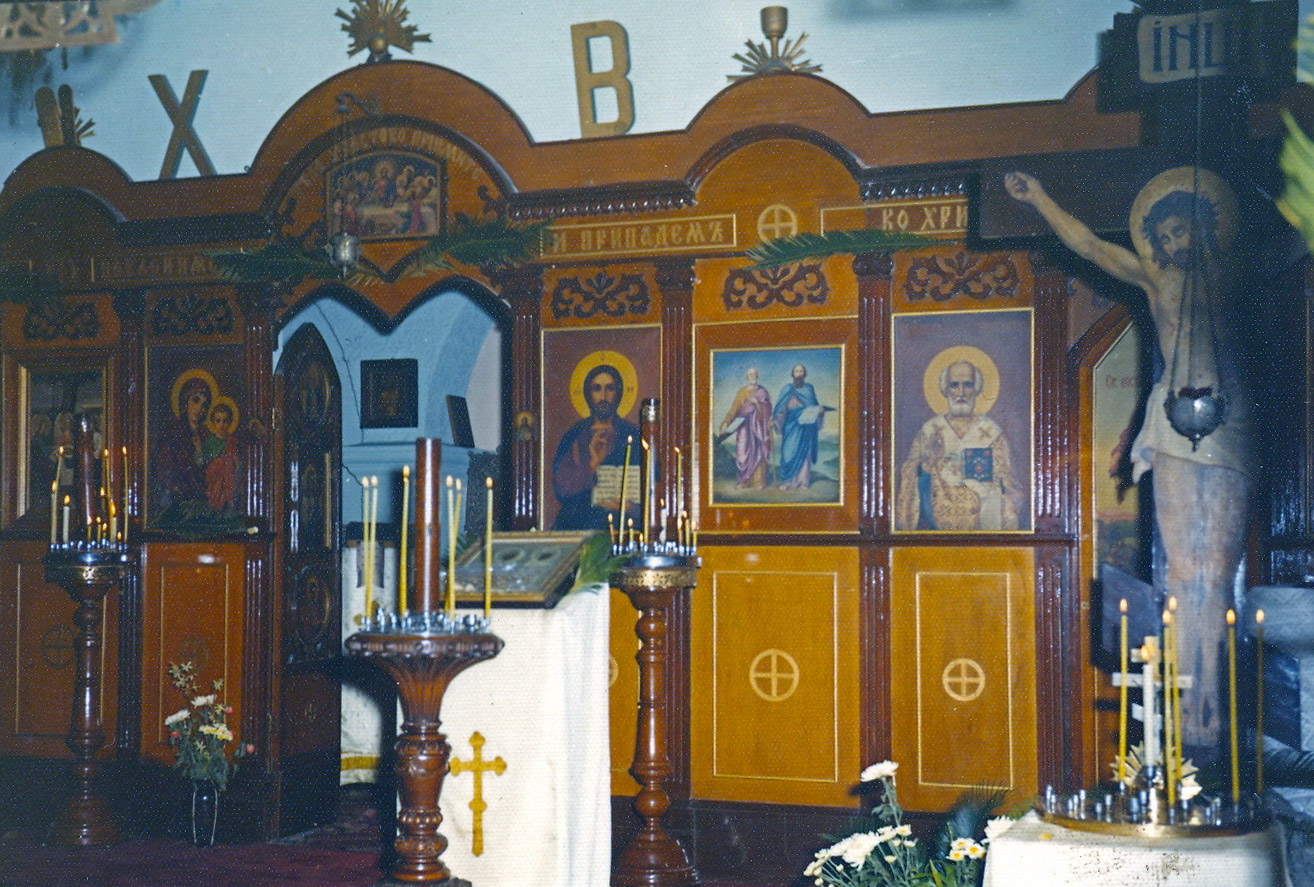 The end of 1968 was marked by an important event in the life of the Russian Orthodox community in Hong Kong. Bishop Juvenaly (Poyarkov) of Zaraisk visited Hong Kong on his way to Tokyo on November 27­28. Fr. Dmitry was bed­ridden at that time, but he vested himself and met Bishop Juvenaly with the cross in his hands at the entrance to the church. The church authorities in Moscow have not forgotten Fr. Dmitry, though there were no contacts between them and the Hong Kong parish for more than ten years. Bishop Juvenaly awarded Fr. Dmitry with a pectoral cross. On November 28 His Grace celebrated the Divine Liturgy in the Church of Ss. Peter and Paul. It was the first episcopal service in Hong Kong since 1945, when Bishop John (Maximovich) of Shanghai was the celebrant.

Fr. Dmitry's health was getting worse and in the morning of January 17 he passed away to the Lord. His Holiness Patriarch Alexy I, Metropolitan Nikodim and Metropolitan Juvenaly sent telegrams of condolence to the orphaned parishioners in Hong Kong.Bishop Hermogenes of Podolsk and Archpriest Arkady Tyschuk (who served in Tokyo) came for the funeral service with the blessing of the Patriarch. Fr. Dmitry was buried near the graves of his wife and daughter at the Colonial Cemetery.

After Fr. Dmitry's demise the parish in Hong Kong had to decide whether they would maintain the parish, invite a priest from a foreign country, buy a building for the church or rent any premises to keep church property. The parish meeting resolved on June 7, 1970 that the church should be closed for the lack of finance. The majority decided to send church property to Australia. 24 members out of 36 present (with 12 abstentions) voted against asking the Moscow Patriarchate for financial help. Moscow did not intend to support the parish or appoint a new priest.

In the late 1970s, the Hong Kong authorities decided to destroy part of the Colonial Cemetery to construct new roads there. Fr. Dmitry's daughter, Ms. Adelaide Dmitrievna Fogt asked the Governor of Hong Kong to permit her to transfer the remains of her father to another place. British authorities saved the graves of Fr. Dmitry and his relatives and transferred them closer to the old Church located at the cemetery. Memorial services in commemoration of Fr. Dmitry are still being conducted there. 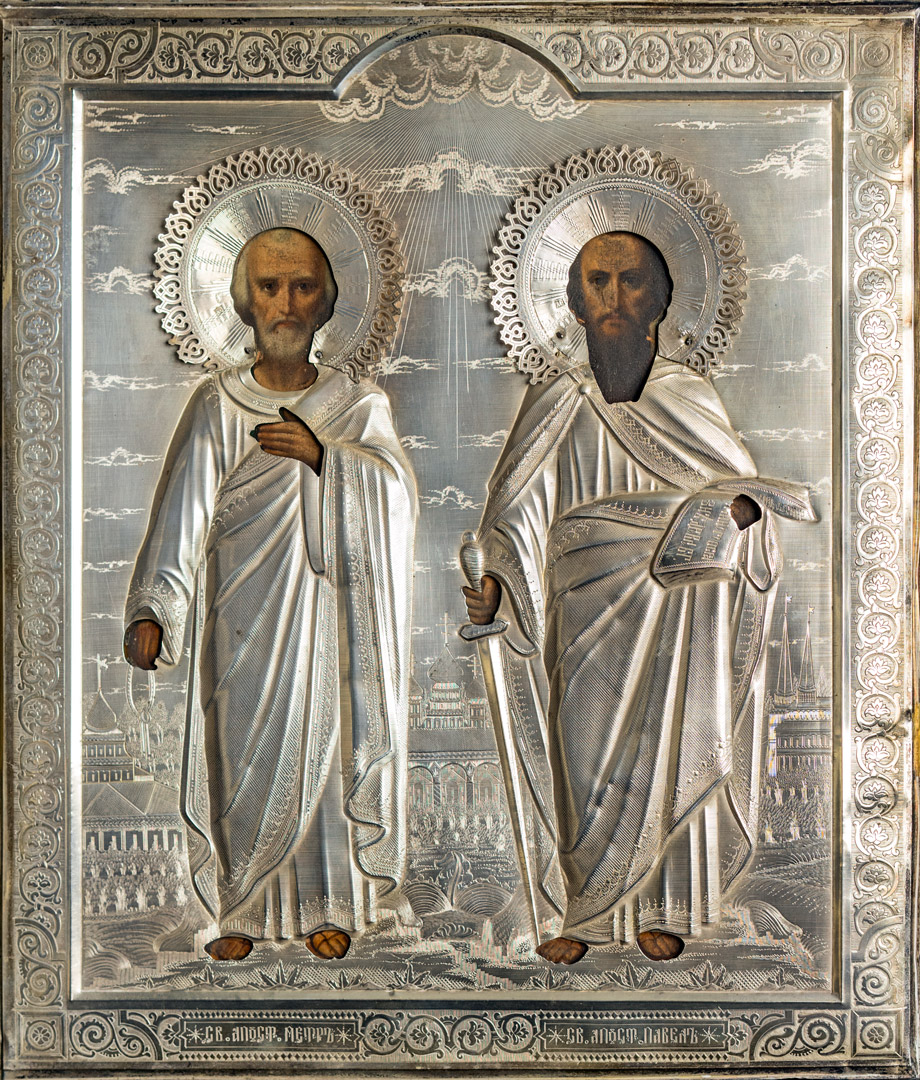 On the 6th of October, 2008 the parish of Ss Peter and Paul was officially re­established by the decision of the Holy Synod of the Orthodox Church of Russia (Moscow Patriarchate). Archpriest Dionisy Pozdnyaev, the member of the Department for External Church Relations of Russian Orthodox Church was appointed the Rector of the parish.
In September, 2010 the parish moved to the leased premises at the address 2 Queen’s Road West.
In December, 2012 the parish organized the celebration of the 300th Anniversary of the establishment of the Orthodox Mission in China. The celebration was headed by the Bishop Ephraim of Bikin (Prosyanok), who came from Khabarovsk.
The setting up of the first Chinese Orthodox publishing house “China Orthodox Press” in 2014 become a significant event in the life of the parish.
In December, 2014 a parishioner of Ss Peter and Paul Church Anatoly Kung was inducted into a church office first as a dean, then a priest. He was ordained in Khabarovsk by the Metropolitan Ignatius of Khabarovsk and Priamurye. Father Anatoly became the first ever Hongkonger-Orthodox priest.
From July, 2016 the Church of Ss Peter and Paul is situated in the new permanent premises at the address 32 Des Voeux Road West.