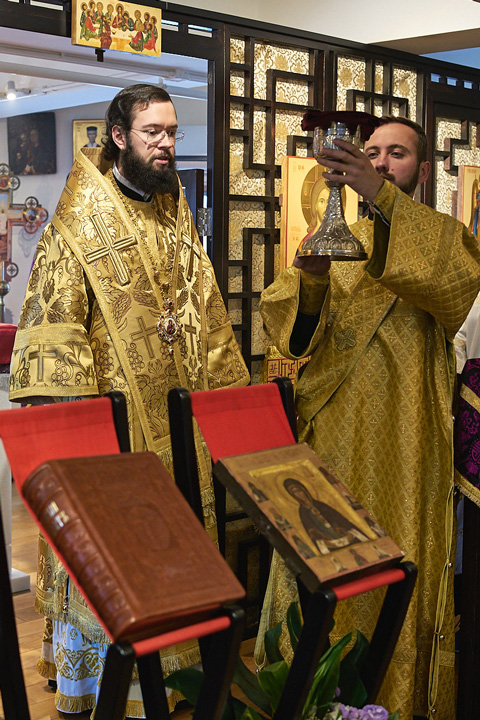 On September 29, 2019, the head of the Office of the Moscow Patriarchate for Foreign Institutions, Metropolitan Anthony of Korsun and West Europe, performed the Divine Liturgy in the church of the Peter and Paul Parish in Hong Kong.

While reading the clock, Metropolitan Anthony tonsured Dimitry Romanov (Yang) as a reader.

The Divine Liturgy was performed in Church Slavonic, Chinese and English.

During the service, the Consul General of the Russian Federation in Hong Kong, I.I., prayed. Sagitov, employee of the Department for External Church Relations of the Moscow Patriarchate D.I. Petrovsky, parishioners of the temple.

In the archpastoral word on the release of the Liturgy, Metropolitan Anthony greeted the members of the Orthodox community in Hong Kong and conveyed the blessings of His Holiness Patriarch of Moscow and All Russia Kirill to the audience. In memory of the prayer for the service, the head of the Moscow Patriarchate Office for Foreign Institutions donated to the parish a set made by Russian masters for the sacraments of baptism and anointing.

The Eucharist was celebrated in the Church of Slavonic, Chinese and English.

The Consul General of the Russian Federation in Hong Kong, I. Sagitov, the staff member of the Department of External Church relations of the Moscow Patriarchate, Mr. D. Pietovsky, and the parishioners participated in the celebration.

Metropolitan Antony greeted the members of the Orthodox Church in Hong Kong and conveyed the blessings of the Patriarch Kiril of Moscow and All Russia.

Metropolitan Anthony also presented the Patriarchal Award - the Order of St. Seraphim of Sarov (III degree) - Archpriest Dionisy Pozdnyaev in consideration of his 25-year-old ministry of the Church as a presbyter.

Vladyka also warmly welcomed the Consul General of Russia in Hong Kong. During the conversation after the service, Metropolitan Anthony and II. Sagitov discussed a wide range of issues of interaction between the Russian diplomatic mission and the Peter and Paul parish.

A fraternal meal was offered to all those present, during which the archpastor continued to communicate with the faithful.

During his stay in Hong Kong, Metropolitan Anthony of Korsun and West Europe visited the old colonial cemetery, where he performed short memorial service at the grave of the first rector of the Peter and Paul Parish in Hong Kong Archpriest Dimitry Uspensky; the hierarch also familiarized himself with the sights of the special administrative region of the PRC.

During his stay in Hong Kong, Metropolitan Anthony visited the old cemetery of the colonial period and held there for the first chief priest of the Hong Kong Peter and Paul parish, Fr. Dmitry Uspensky. His High Eminence also visited the scenic spots of Hong Kong.