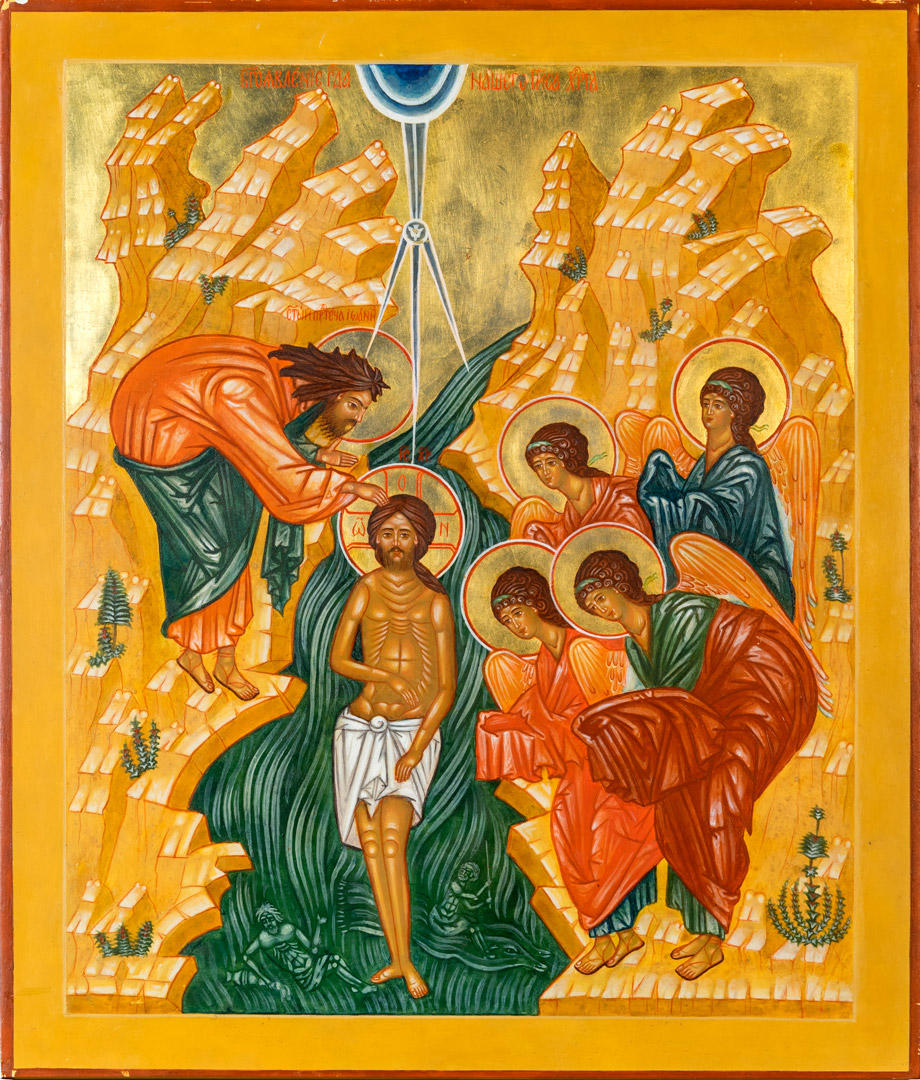 Theophany (from Greek theophania, meaning "appearance of God") is one of the Great Feasts of the Orthodox Church, celebrated on January 6. It is the feast which reveals the Most Holy Trinity to the world through the Baptism of the Lord (Mt.3:13-17; Mark 1:9-11; Luke 3:21-22).

This observance commemorates Christ's baptism by John the Forerunner in the River Jordan, and the beginning of Christ's earthly ministry. The Feast of Theophany is the culmination of the Christmas Season, which starts on December 25 and ends on January 6. In mystic commemoration of this event, the Great Blessing of Water is performed on this day, and the holy water so blessed is used by the local priest to bless the homes of the faithful.

The feast is called Theophany because at the baptism of Christ the Holy Trinity appeared clearly to mankind for the first time—the Father's voice is heard from Heaven, the Son of God is incarnate and standing physically in the Jordan, and the Holy Spirit descends on Him in the form of a dove.

This feast is also sometimes referred to as Epiphany by English-speaking Orthodox Christians, but that name more properly refers to the Western Christian feast falling on that same day and commemorating the visit of the Magi to the child Jesus. The term epiphany does appear in some of the service texts for this feast, however.

Originally, there was just one Christian feast of the shining forth of God to the world in the human form of Jesus of Nazareth. It included the celebration of Christ's birth, the adoration of the wise men, and all of the childhood events of Christ such as his circumcision and presentation to the temple as well as his baptism by John in the Jordan. There seems to be little doubt that this feast, like Pascha and Pentecost, was understood as the fulfillment of a previous Jewish festival, in this case the Feast of Lights. The Armenian Apostolic Church still keeps January 6 as a feast of both Christ's Nativity and baptism.

Celebration of the feast

The Baptism of Christ (Menologion of Basil II, 10th-11th c.)
The services of Theophany are arranged similarly to those of the Nativity. (Historically the Christmas services were established later.)

The Liturgy of the feast begins with psalms of glorification and praise instead of the three normal Antiphons. And the baptismal line from Galatians 3:27 replaces the Thrice-Holy.

For as many as been baptized into Christ have put on Christ: Alleluia.
The Gospel readings of all the services tell of the Lord's baptism by John in the Jordan River. The epistle reading of the Divine Liturgy tells of the consequences of the Lord's appearing which is the divine epiphany.

Since the main feature of the feast is the blessing of water. It is prescribed to follow both the Divine Liturgy of the eve of the feast and the Divine Liturgy of the day itself. But most local parishes do it only once when most of the parishioners can be present. The blessing verifies that mankind, and all of creation, were created to be filled with the sanctifying presence of God.

In connection with the feast, it is traditional for the priest to visit all the homes of the faithful for their annual house blessing using the water that has been blessed at the Theophany services.

Troparion (Tone 1)
When Thou, O Lord, wast baptized in the Jordan, worship of the Trinity wast made manifest; for the voice of the Father bore witness to Thee, calling Thee His beloved Son. And the Spirit in the form of a dove confirmed the truth of His word. O Christ our God, Who hath appeared and enlightened the world, glory to Thee.

Kontakion (Tone 4)
On this day Thou hast appeared unto the whole world, and Thy light, O Sovereign Lord, is signed on us who sing Thy praise and chant with knowledge: Thou hast now come, Thou hast appeared, O Thou Light unappproachable.